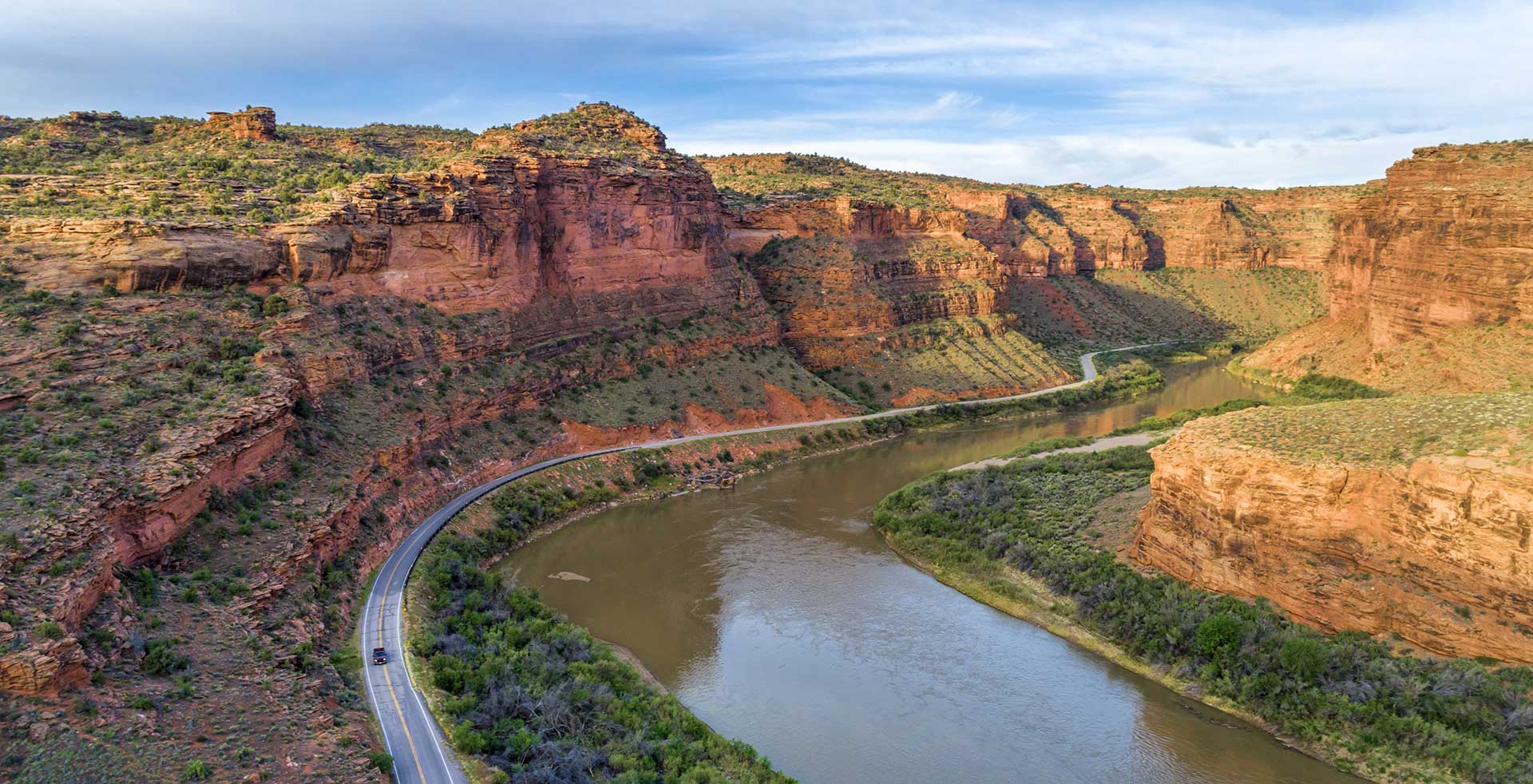 Every twist and turn holds something new.

This spectacular route along the Colorado River gorge begins at the Colorado River Bridge on the north end of Moab. Spending a day exploring this section of the river gorge will provide you with jaw dropping scenery and take you to the sixth-longest natural rock span in the United States, world famous movie locations, beautiful picnic and bouldering areas, a Film Heritage Museum, a large variety of hiking trails including one that goes to the breathtaking Fisher Towers, historical points of interest, guided horseback riding opportunities, outdoor dining, a brand new mercantile (opening in 2020) and a ghost town.

The highway was originally constructed to connect rural cities in eastern Utah with Grand Junction, Colorado, the largest city in the region. Part of the highway was merged into the Utah state highway system in 1931; the rest was taken over by the state and assigned route number 128 in 1933. Today, the highway is used as a scenic drive for visitors to the area.

The highway crosses the Colorado River at the site of the Dewey Bridge, listed on the National Register of Historic Places. This bridge was the longest suspension bridge in Utah until April 2008 when it was destroyed by a fire. 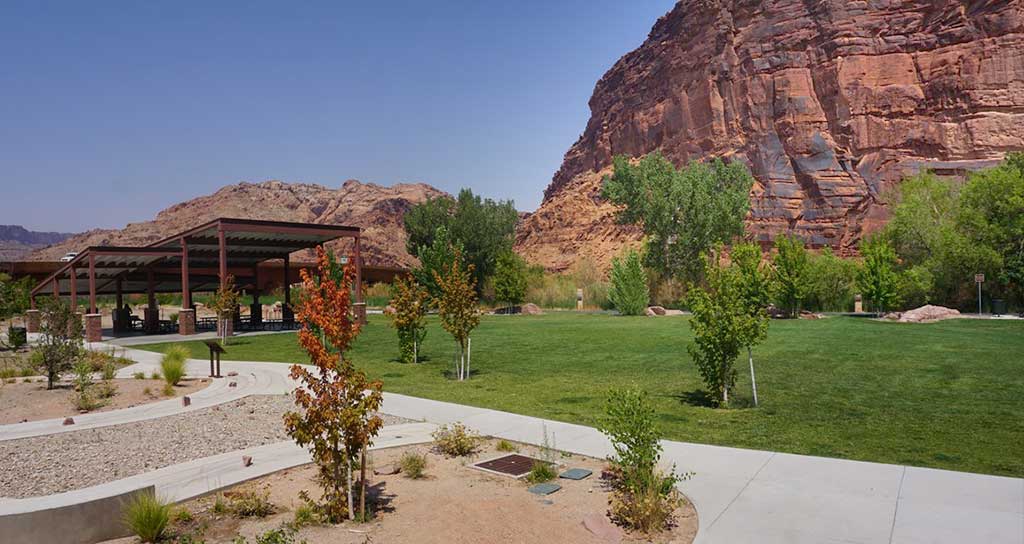 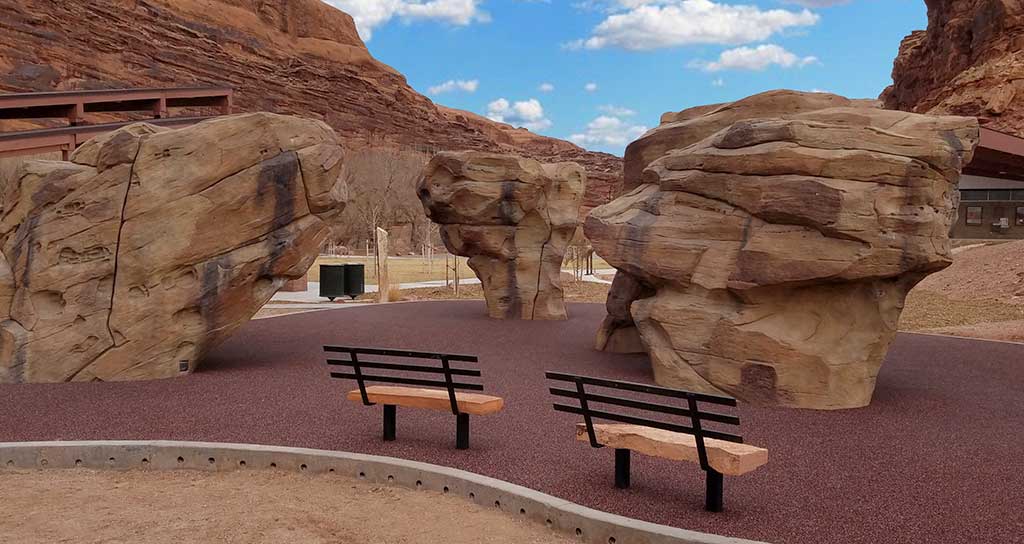 This scenic park is located on the banks of the Colorado River just north of Moab on U-128 at the intersection with US 191. It’s a lovely facility with a paved parking area and big shade trees along the riverbank. There’s a footbridge over the Colorado River that connects paved trails that go north-south along US 191 and east-west along U-128 and the river through red rock canyons. Restrooms and picnic areas are available. Facilities are wheelchair-accessible.

Lions Park also contains Moab Boulder Park. Moab is a very, very difficult place to get going when you’re a beginner at climbing, and this park really bridges the gap from beginners to help them get out on the cliffs. Along with three custom-made boulders that were color-matched to blend with Moab’s surrounding red rocks, the park also includes a thick rubber surface beneath the climbing rocks to help cushion the inevitable falls.

Continuing down U-128, the drive parallels the Colorado River within a narrow section of the Colorado River gorge, providing breathtaking views of the surrounding red sandstone cliffs. Popular attractions along this portion of the route include viewpoints of the river, public camping areas, and Grandstaff Canyon, which contains a delightful hiking trail to Morning Glory Natural Bridge.

Grandstaff Canyon was named after William Grandstaff, an African American prospector and rancher who grazed his cattle here during the late 1800s. It is a lovely canyon, cut into the Navajo Sandstone by a small, perennial stream that begins about six miles from the southern shore of the Colorado River. The trail winds along the stream through an oasis of cottonwood and willow trees, cut off from the desert above by towering sandstone cliffs. Like all good hikes, this one also has a reward at the end. Morning Glory Natural Bridge spans the head of one of Grandstaff’s side canyons at the end of the trail. According to Bureau of Land Management statistics, Morning Glory is the sixth largest natural bridge in the United States.

Grandstaff Canyon was named after William Grandstaff, an African American prospector and rancher who grazed his cattle here during the late 1800s. It is a lovely canyon, cut into the Navajo Sandstone by a small, perennial stream that begins about six miles from the southern shore of the Colorado River. The trail winds along the stream through an oasis of cottonwood and willow trees, cut off from the desert above by towering sandstone cliffs. Like all good hikes, this one also has a reward at the end. Morning Glory Natural Bridge spans the head of one of Grandstaff’s side canyons at the end of the trail. According to Bureau of Land Management statistics, Morning Glory is the sixth largest natural bridge in the United States. 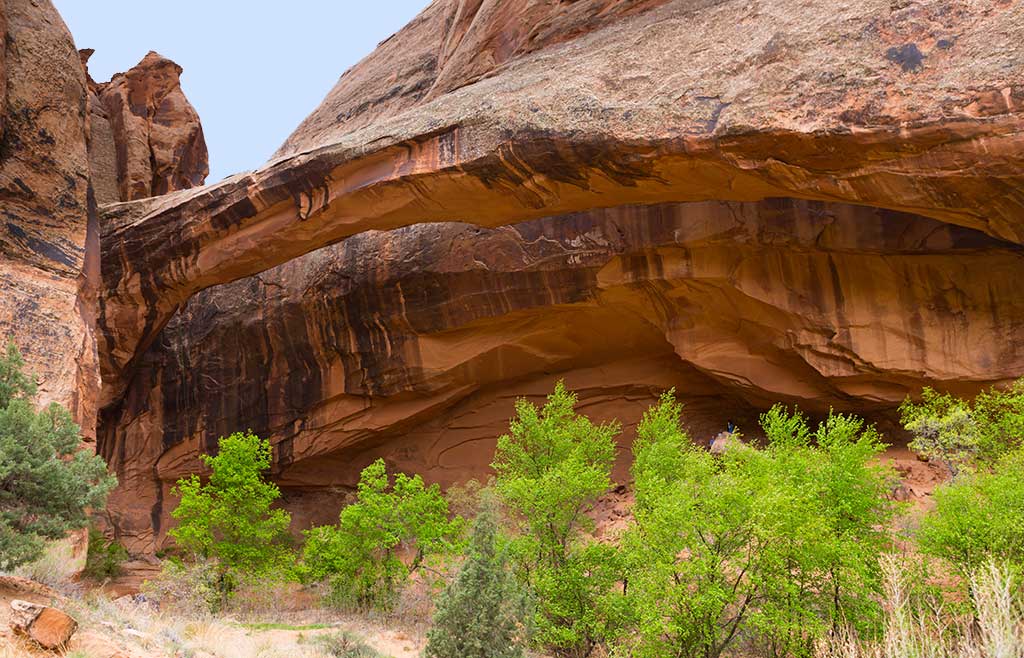 Big Bend Bouldering Area has something for every age and ability. Located right off the highway, literally across the street from the Colorado River, it is hard to find a more scenic location for bouldering. It’s not unusual to have beginners working next to world-class climbers. Bring a comfortable chair and watch the show or work the routes yourself.

At 13 miles (20.9 km) the gorge widens as the highway proceeds past Castle and Professor Valleys, which have been the shooting locations for many western films including Wagon Master and Rio Grande, along with numerous television commercials. 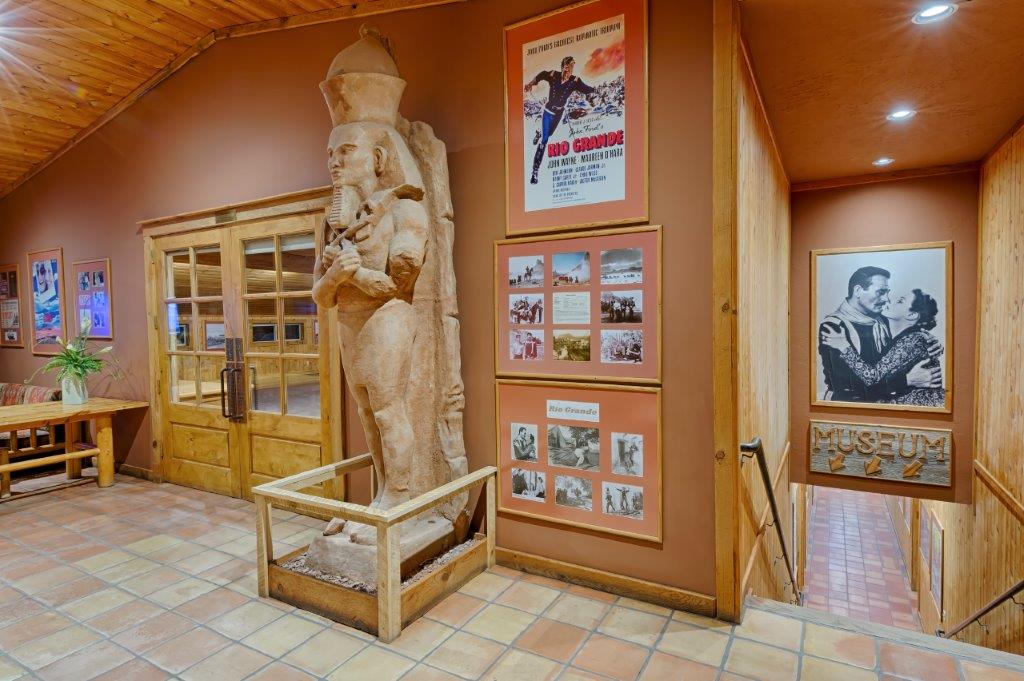 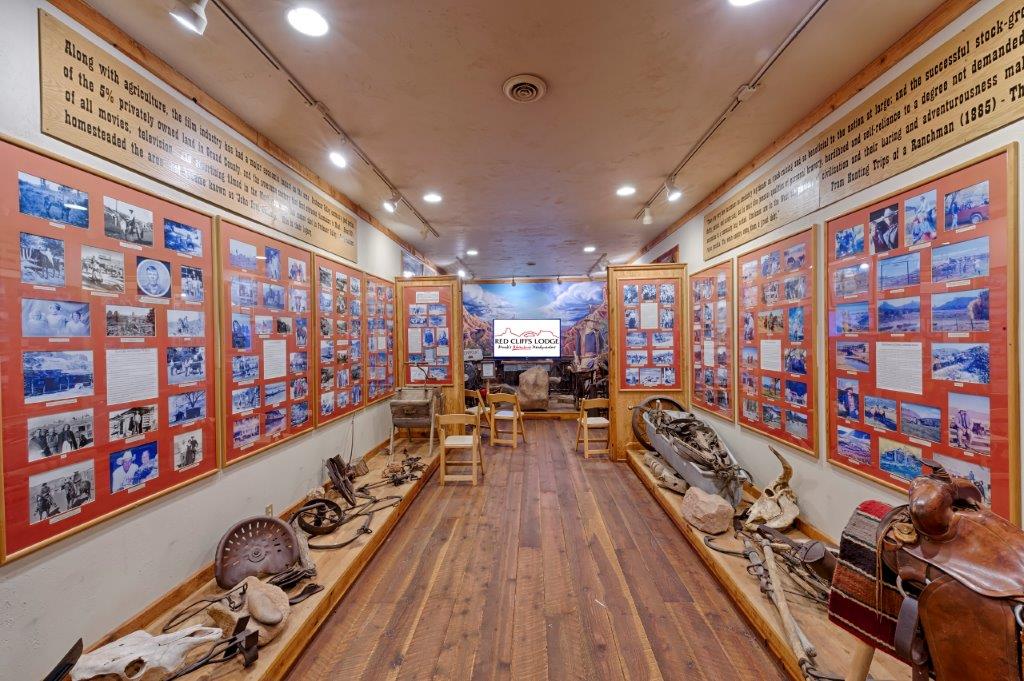 Red Cliffs Lodge, on the banks of the mighty Colorado River, is home for the Moab Museum of Film & Western Heritage. The lodge is built on the old George White Ranch, a key location for nine of the big Westerns including Rio Grande, Cheyenne Autumn, Ten Who Dared, The Comancheros, and Rio Conchas. The late George White was founder of the Moab to Monument Valley Film Commission, the longest ongoing film commission in the world. In the museum one can learn more about film locations, how the sets are built, and how the filming process is managed on nature’s own sound stage. On display in the museum are production photographs, movie posters, autographed scripts, props from the many pictures filmed in the area, and displays about the western ranching heritage.

Dozens of movies have used the ranch and surrounding area as the set and backdrop for their films. From Disney to Spielberg and from westerns to sci-fi, Moab has been the scenic choice for some of Hollywood’s greatest movies. Red Cliffs has hosted some of its biggest stars; John Wayne, Maureen O’Hara, Rock Hudson, Henry Fonda, Roger Moore, Burt Reynolds, Jason Patrick, Johnny Depp and many, many more.

Westworld has a lot of scenes that were filmed along Highway 128.
Austin Powers’ helicopter, for Goldmember, was shot on Highway 128.

During the season, Red Cliffs Lodge offers an outdoor lunch on the banks of the Colorado River. (Open to the public as well as guests.)

Castleton Tower is a 400-foot (120 m) Wingate Sandstone tower standing on a 1,000 foot Moenkopi-Chinle cone above the northeastern border of Castle Valley. The Tower is world-renowned as a subject for photography and for its classic rock climbing routes, the most famous of which is the Kor-Ingalls Route featured in the famous guidebook “Fifty Classic Climbs of North America”. In 1964, Chevrolet filmed a commercial for the Impala convertible perched atop the tower.

Adjacent to Castleton Tower is The Rectory, a thin 200 foot (61 m) wide, and 1,000 foot (305 m) long north-to-south butte with 200 ft vertical Wingate Sandstone walls tower standing on a 1,000 foot Moenkopi-Chinle base. The Jon Bon Jovi music video Blaze of Glory was filmed at The Rectory. The Australian band Heaven also filmed their Knockin’ on Heaven’s Door music video on top of The Rectory.

Note: There are great views of these formations from the Sylvester Trail (below). 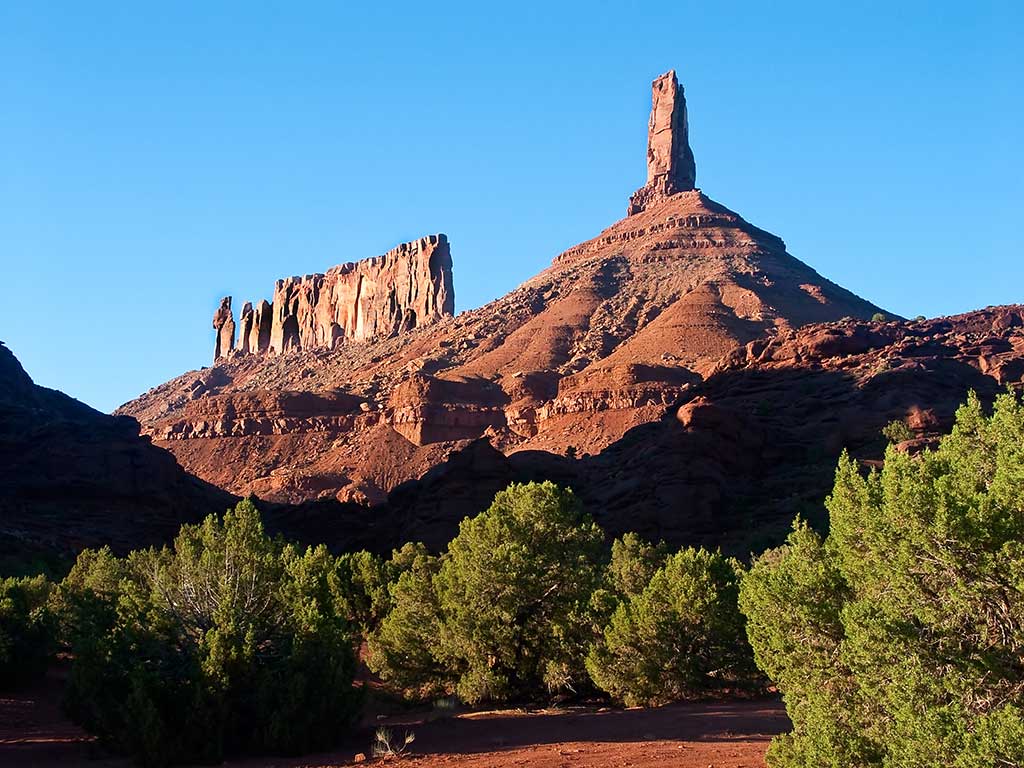 Opening to the public in Spring 2020, on the property of Sorrel River Ranch, JJ’s Mercantile will provide everything from gifts, groceries and gear for the guests of the resort, campers, locals and those passing through. Stop by for hot coffee, tantalizing pastries, fresh baked bread, tasty sandwiches and salads artfully prepared from JJ’s open kitchen and ready to go.

From the Professor Valley Ranch Road turn-off on the right, drive 2.2 miles (3.5 km) on a well graded road to the trailhead.

The Sylvester Trail is in the Onion Creek area and follows open desert through the Professor Valley drainage and features beautiful views of the surrounding terrain. The trail is named after Dr. Sylvester Richardson, who with his wife Mary Jane, were among the first settlers in the valley back in the 1880’s. Sylvester’s nickname was ‘Professor’ for which the valley is named.

From the parking area, follow the trail which is relatively flat and easy. The trail will cross a dry wash several times before it begins to ascend a bench on the right. The trail weaves along this bench gradually ascending. The rock formations include the Preacher, The Nuns, Rectory and Castleton Tower. Once the trail passes the foot of Castleton Tower, it will begin to descend slightly.

When you reach a dirt 4×4 road, the Sylvester Trail ends and you return the way you came. 6.9 miles (11.1 km) round-trip. (The trail is shared with equestrian users and there is no shade, so avoid on hot days.)

Turn right on the well graded dirt road, then travel 2.2 miles (3.5 km) to the trailhead. The Fisher Towers trail is a world class experience. The views of Castle Rock and the shear sandstone cliffs of the Colorado River are stunning. This is an out and back hike will take you by 3 amazing formations, The Kingfisher, Echo Tower and The Titan. This area is popular with rock climbers so keep an eye up on the rocks. The trail descends into the canyons in several places which brings the overall elevation gain to about 1000 feet. The best picture taking time is probably when the afternoon sun is looking over your shoulder at the towers but alas that is also the most unforgiving time on a hot summer day so be sure to bring plenty of water.

This is a foray into the heart of the Richardson Amphitheater, near the Colorado River, in an area of beautiful rock formations. The Amphitheater Loop Trail is approximately 4 miles (6.4 km) from the Fisher Towers Trailhead and both trails can be walked in a single day. The Amphitheater Loop Trail makes a lovely walk, and climbs approximately 250 feet in elevation to afford a stunning view of the Colorado River corridor. Along the way, you can see interesting sandstone formations in the Moenkopi and Cutler sandstone layers. 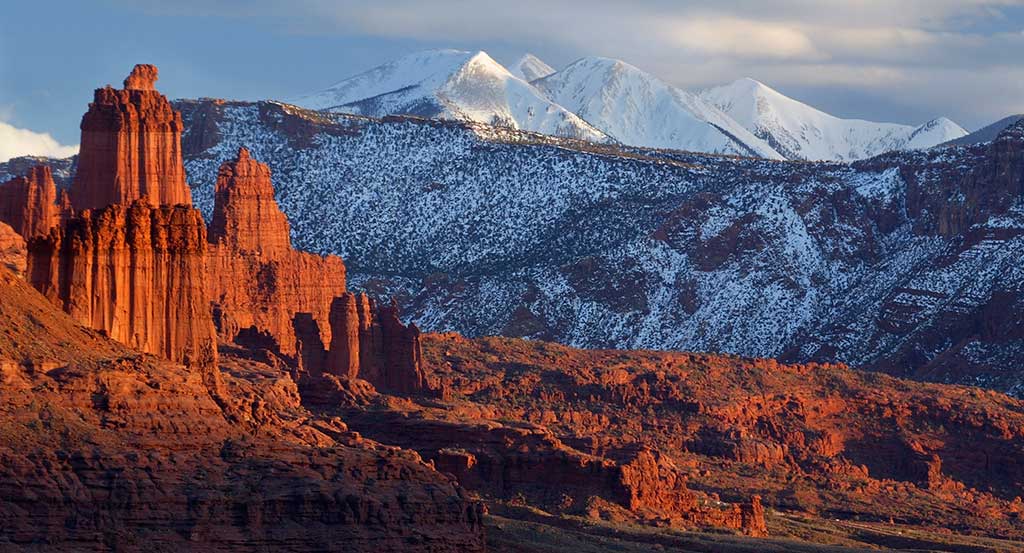 The roadside viewpoint on the left provides one of the grandest views in the west, the red rock spires of the Fisher Towers set against the often snow covered peaks of the La Sal Mountains. 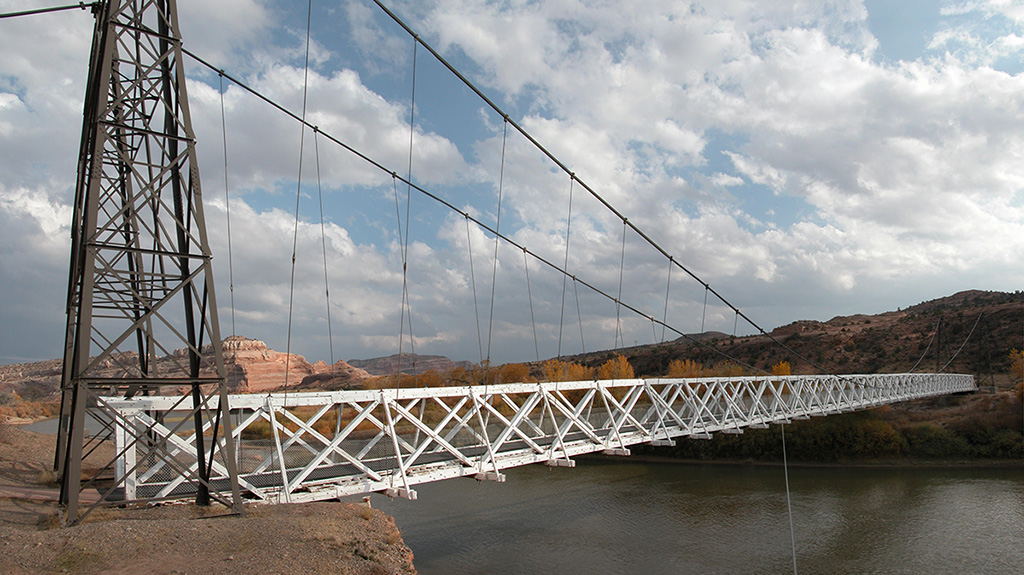 Historic Dewey Bridge, before it was destroyed by fire in 2008.

Dewey Bridge, built in 1916, originally carried U-128 across the Colorado River. The bridge featured an all wood deck measuring 502 feet (153 m) long, 10.2 feet (3.1 m) wide from support to support and 8 feet (2.4 m) wide from rail to rail. The bridge also consisted of two metal towers, a run of seven cables on each side of the bridge deck, and cable anchors. The bridge was designed to support the weight of six horses, three wagons, and 9,000 pounds (4,100 kg) of freight.

On the day of its completion, it was the second-longest suspension bridge west of the Mississippi River. The longest was the Cameron Suspension Bridge, also built by the Midland Bridge Company, who used the same base plans for both bridges. Dewey Bridge remained the longest suspension bridge in Utah until it was destroyed by fire in 2008. The remains of the bridge and a historical marker remain on the site.

The town started in the 1880s as a saloon and water-refilling station for the Denver and Rio Grande Western Railroad. As work crews and, later, travelers came through, stores, hotels and restaurants sprang up to accommodate them. Nearby cattle ranchers and sheepherders in the Book Cliffs north of town began using Cisco as a livestock and provisioning center. Around the turn of the 20th century, over 100,000 sheep were sheared at Cisco before being shipped to market. After oil and natural gas were discovered, people began traveling more and Cisco continued to grow. The town’s decline coincided with the demise of the steam locomotive. A declining economy crashed when Interstate 70 was built, bypassing Cisco. After another 5 miles (8 km) the route intersects Interstate 70.