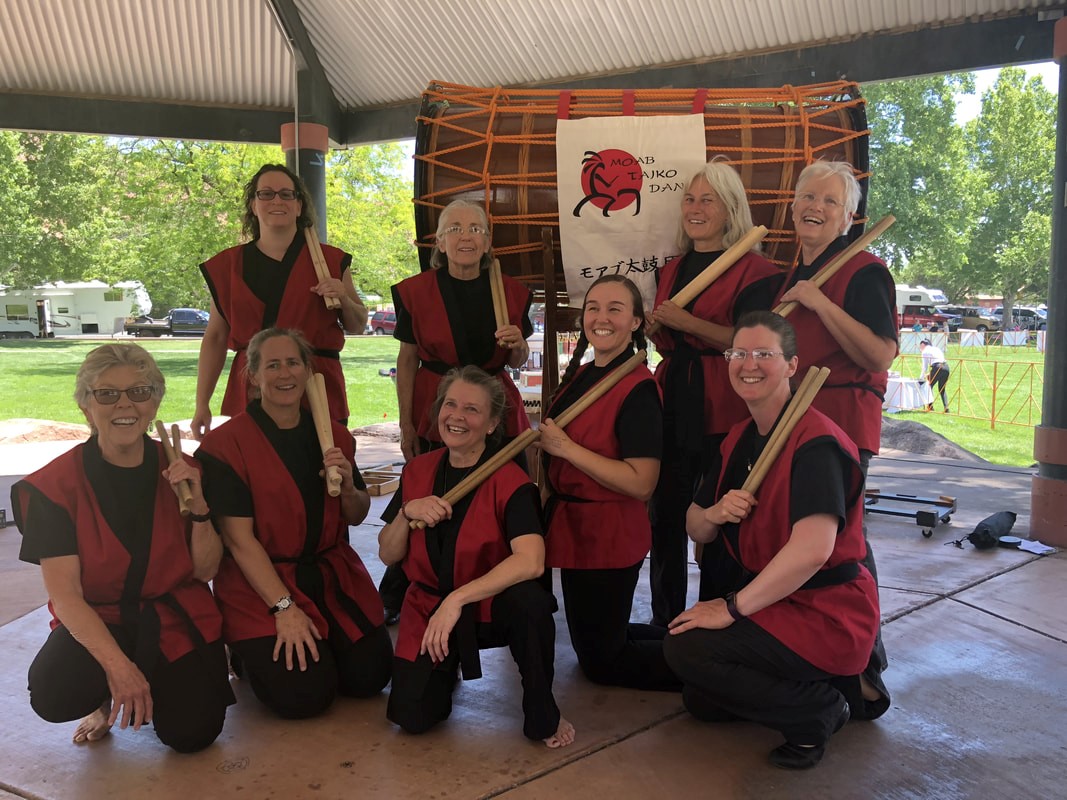 The TAIKO, a traditional Japanese drum, is perhaps the most primal of all instruments. In ancient Japan, the TAIKO was the symbol of the rural community. The farthest distance at which the TAIKO could be heard determined the boundary of the village. Experiencing the primal sounds of the drum may serve to remind us of our unity in the much larger community of the world.

It is said that the sound of the Great TAIKO resembles a mother’s heartbeat as heard and felt from within the womb. To play TAIKO as “children of the drum” is to “play purely with the heart of a child.” (Kodo)

Moab Taiko Dan is a non-profit organization that brings joy to the Moab community. The group is under the instruction of Sensei Tiffany Tamaribuchi of Sacramento Taiko Dan.

Annett Kearl, Ph.D. has been a practicing music/sound therapist for 29 years. Annette Kearl first brought taiko to Moab in October of 1994. Called “HenKei Taiko,” the group first drummed on old tires lashed to folding chairs, using 16” wooden dowels as drumsticks. They met in backyards, old warehouses, the old HMK School or any place they could arrange. Under Annette’s leadership, the group built their own “real” drums, which were very loud — enough sometimes to catch the attention of friendly Moab City Police.

When Annette left Moab in the late 1990s, the group worked hard to survive, reaching out to the national and international taiko community for instruction and inspiration. Sensei Tiffany Tamaribuchi of Sacramento Taiko Dan, who had been one of Annette’s taiko teachers in California, agreed to take, Moab Taiko Dan under her wing. This relationship has survived ever since, and Sensei continues to instruct the group in taiko skills and practices. 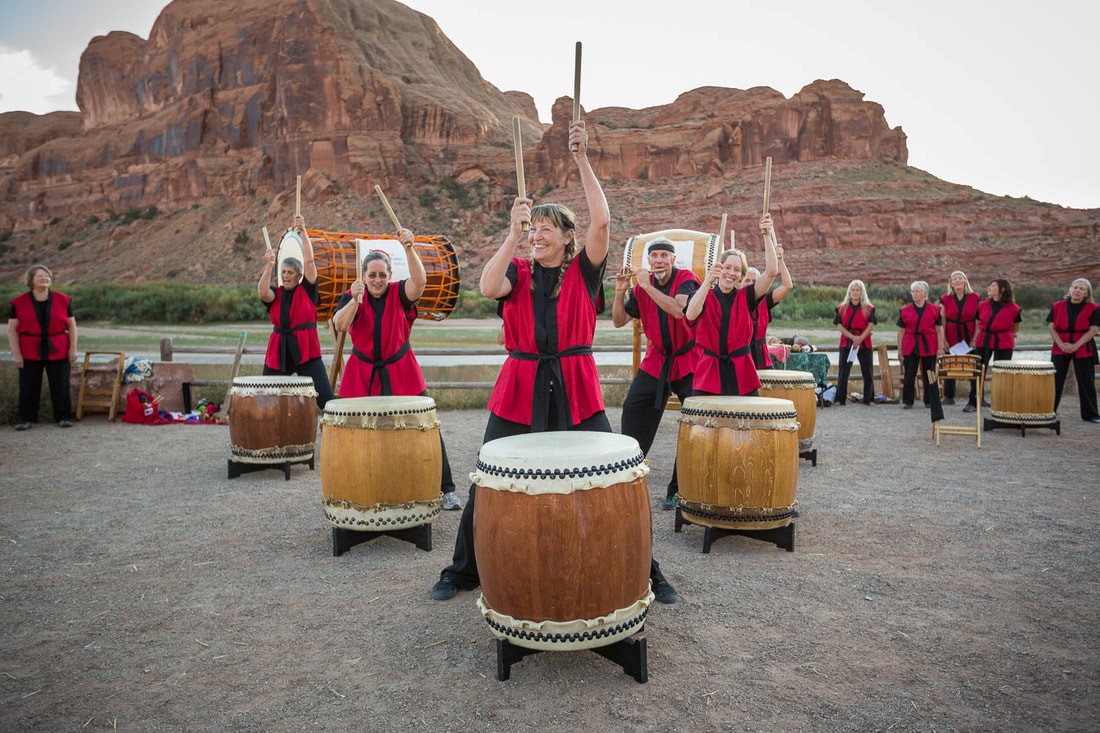 Here in Moab, one of the most interesting melodies is not created by the desert itself, but by Japanese-style drums. This music is in part inspired by the exceptional splendor of our beloved Moab desert. Japanese aesthetics greatly embrace the beauty of nature. The drumming produced by Moab Taiko Dan (MTD) pays homage to the human spirit as well as the wonders of the rivers, canyon, and wilderness.

MTD consists of Moabites whose love of this art form produces complex rhythms and melodies. Member dedication to their art belies their amateur status. Some members have been with MTD for two decades. Many members attend practices several times per week.

This is a unique group because it is made up only of Moab women and Taiko is usually made up of groups of men. However, the MTD doors are open for all types of age and gender now they have 16 active members.

“MTD has for many years been a beloved part of many Moab events” explained Andrea Lombardo, who has been drumming with the group since 2015. “When the group drums for half-marathons, the runners love it. They can hear the songs, the beats, and pitches of our various drums for miles (thanks to the canyon walls). Our music encourages them to do their best. At the Moab Arts Festival, when the drumming starts, people rush toward the stage.”

A nonprofit organization, MTD’s dream, and hope is to keep alive this vital exchange of Japanese culture in our American desert setting—and have a lot of fun doing it. To keep drumming, MTD needs a new practice space, lets get going to help MTD to find a new home.